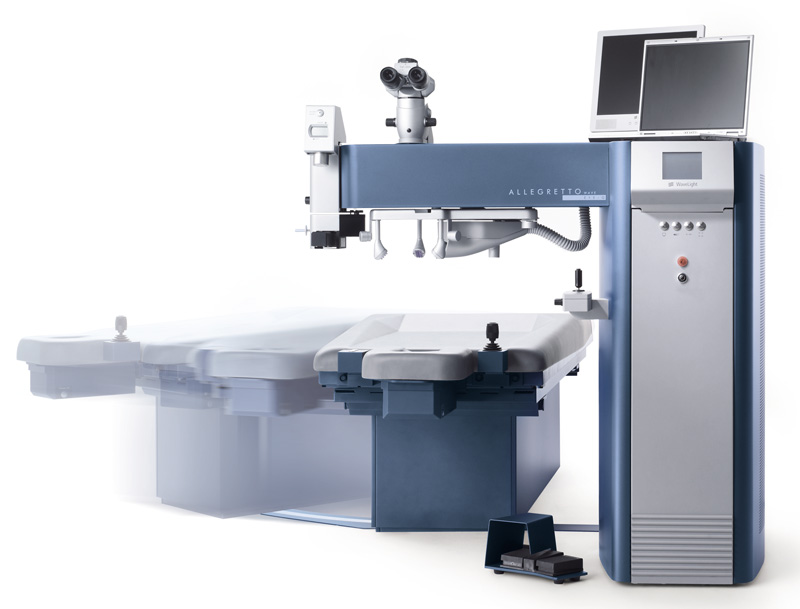 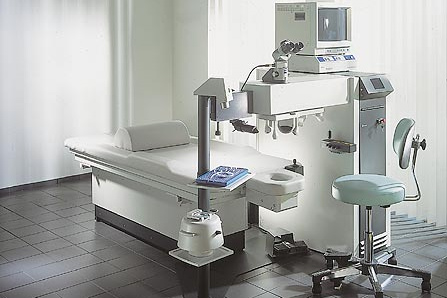 What is it? The WaveLight ALLEGRETTO WAVE™ is a refractive excimer (heatless) laser system. It uses invisible ultraviolet (UV) light pulses to remove precise amounts of corneal tissue (the transparent outer coat of the eye that helps focus light to create an image) from the eye to reduce or eliminate farsightedness and astigmatism (distorted vision).

How does it work? The laser system treats farsightedness by removing tissue from the outer areas of the cornea to make it steeper. It treats astigmatism by flattening the central cornea by different amounts and at different locations to correct uneven focus.

When is it used? The laser system is intended for the LASIK (Laser-Assisted in Situ Keratomileusis) treatment of patients who:

What will it accomplish? Excimer laser treatment is intended to reduce or eliminate farsightedness and/or astigmatism.

Side effects may include:

Patients treated with excimer lasers may need reading glasses at an earlier age than usual.

When should it not be used? The laser system should not be used on patients who:

The success of the ALLEGRETTO WAVE® can be directly measured by our patients’ remarkable improvement in visual acuity and low occurrence of side effects.

PerfectPulse Technology™ represents a new approach to laser vision correction – it accounts for speed, precision, and safety in the ALLEGRETTO WAVE® laser and offers improvements that are revolutionary in the field. Smart Energy Control measures and adjusts energy levels in the laser pulse from creation to delivery. High-speed eye tracking charts the eye’s movement 200 times per second. As a result, every laser pulse is completely controlled and accurate, achieving the most accurate level of correction possible.

You can have peace of mind that the amount of energy in the laser has been calibrated to exactly the right level. After the beam has been created, it passes through three checkpoints on its way to your eye. At each of these points, the energy level is checked and adjusted if necessary, ensuring that the beam is perfectly attuned at its destination.

ALLEGRETTO WAVE® ’s laser is essentially a precise, controlled beam of energy, which translates to heat. To make sure that this beam never causes any sort of adverse heating effect on the cornea, ALLEGRETTO WAVE® ’s PerfectPulse Technology™ places the laser pulses in such a way that only every fifth pulse overlaps. Not only does this preclude unwanted heating effects, it is one of the ways that ALLEGRETTO WAVE® achieves a rounder, more natural corneal surface than many other lasers used for vision correction.

Due to the remarkable speed of both the eye and the ALLEGRETTO WAVE® procedure, the laser beam needs to be constantly and minutely adjusted to the position of the eye at any given time. Every 4-6 milliseconds, the eye’s location is measured and the internal mirrors of the ALLEGRETTO WAVE® are automatically aligned. Right before the pulse is released, a second check is made to confirm that the eye has not moved. This happens 200 times every second, once for every laser pulse released. If, at any time, the eye moves too quickly to be measured or moves out of range, the laser will stop and wait for the eye to move back into position.

Currently, the ALLEGRETTO WAVE® is the fastest vision correction laser available in the United States. At 200 laser bursts per second, it only takes about four seconds of treatment to correct one diopter. Of course, spending less time under the laser means less stress and discomfort for the patient.

One of the most innovative features of the ALLEGRETTO WAVE® is the way it uses wavefront-optimized technology to automatically compensate for the curvature of the cornea. In earlier laser correction systems, the “optical zone,” or area of correction, was centered on the front of the cornea; the result was a flattened circular area that ended with an abrupt edge, causing unwanted side effects like poor night vision, glare, and halos.

The ALLEGRETTO WAVE® changes all that. The ALLEGRETTO WAVE® sends extra pulses to the peripheral corneal area in order to compensate for the angle of the laser beam. In this manner, the aspherical shape of the cornea is preserved to a degree that older lasers simply could not achieve. This compensation, combined with the incredibly small, 1mm size of the laser, produces a smooth, effective optical zone that results in what can only be described as seeing like never before.

Imagine a glass ball. If you took a flashlight and aimed it directly at the top of the ball, the light would form a circular shape on the surface of the ball. If you now aimed the flashlight towards the side of the ball, the light would form an elliptical shape and not seem as bright anymore. This is because the same amount of light is suddenly distributed over a larger area and some of the light is reflected away due to the angled surface of the glass ball.

The illustration below demonstrates the use of additional pulses to the corneal periphery in order to compensate for the energy lost through reflection. In this way, the natural cornea shape of each patient can be maintained.

Due to the ALLEGRETTO WAVE® providing custom vision correction with the standard Wavefront Optimized treatment, the majority of patients may not benefit from a wavefront-guided treatment. However, after an extensive analysis of your vision, the doctor will determine whether this treatment will be helpful with the overall laser vision correction outcome.

The wavefront-guided treatment involves an additional step where the results of a detailed scan with the WaveLight ALLEGRO Analyzer provides further measurements for the treatment plan, the data is validated, and then it is transferred to the ALLEGRETTO WAVE® laser system. Next, the final treatment profile is calculated, and then the laser treatment begins.

If you are a candidate for wavefront-guided treatment, you should be pleased to know that patient outcomes from our clinical study results and important distinctions are impressive. A few of the highlights which may be of interest include:

ALLEGRETTO WAVE® is capable of producing some of the largest available optical zones. The optical zone refers to the portion of the cornea that has been corrected by the laser. A larger than normal optical zone is especially important for night vision, and for patients with very large pupils. If a patient’s pupil is larger than the optical zone, they may experience poor peripheral vision, poor night vision, and a higher than normal incidence of “halos” and glare. In the past, this has been one of the biggest drawbacks to conventional laser correction surgery.

At night and in dark conditions, the pupil becomes larger to permit the maximum amount of light to enter the eye. Laser eye correction needs to take this fact into account. If the optical zone is smaller than the size of the pupil at its largest, there is a good chance that the patient will experience poor night vision or problems with glare and halos around bright objects such as oncoming headlights. ALLEGRETTO WAVE® is able to produce the largest available optical zone, virtually eliminating glare and night vision problems associated with older generation lasers.

When it was approved in 2003 as the first new laser in five years, the FDA granted ALLEGRETTO WAVE® the widest approval range ever initially given to a new laser for both myopic and hyperopic vision correction. Since then, the results have been astoundingly positive. ALLEGRETTO WAVE® has been proven to provide superior clinical results, as shown by the following statistics:

Is ALLEGRETTO WAVE® right for me?

ALLEGRETTO WAVE® expands the boundaries of candidacy for LASIK. However, there are certain people who are less than ideal candidates for LASIK and ALLEGRETTO WAVE® . You are probably not a candidate if you are one or more of the following:

During the consultation, please be sure to mention all medications you are taking and any medical conditions you have that might affect the success of laser correction

Back to top
mobile desktop